The Obvious Connections Between Obesity and Sleep Apnea

Sleep apnea is a serious health epidemic that is linked to another problem currently gripping the nation: the rising rate of obesity. Obesity and sleep apnea are so tightly connected that it is hard to discuss one without the other. Understanding the connections between obesity and sleep apnea can help you create a path towards treating both of these dangerous problems. 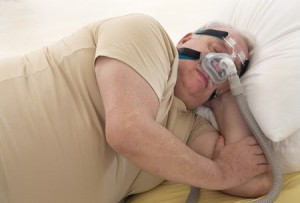 As the rate of obesity in America has increased, the prevalence of sleep apnea has also increased.

Why Obesity Contributes to Sleep Apnea

As people gain weight, fat is spread throughout their body in a variety of places. While most people have a central fat storage area (such as the stomach, legs, hips, or buttocks), fat is still stored in multiple areas. One of these locations is the throat.

That extra fat around the throat muscles is problematic because it narrows the width of your throat passage. A narrowed throat will have a harder time drawing in and expelling air. As a result, snoring with excessive volume (one of the symptoms of sleep apnea) is common in the obese.

However, the real danger of sleep apnea lies in when the throat is obstructed enough to prevent air passage. People with sleep apnea often suffer multiple episodes of air flow stoppage in a night. This stoppage often results in poor sleeping, gasping for air, and can even contribute to heart attacks.

Other Cause of Sleep Apnea

Although obesity is the major cause of sleep apnea, there are other factors which can contribute to its development. They causes include:

The statistics surrounding obesity and sleep apnea tell a very scary tale. According to SleepFoundation.Org, 65% of all Americans are either overweight or obese. Dr. Richard Simon, a sleep specialist in Walla Walla, has even linked this epidemic to a lack of sleep, stating that a decrease in exercise, an increase in caloric intake, and a major decline in sleep throw the body’s natural rhythms out of whack.

And as the rate of obesity has increased, the prevalence of sleep apnea has increased. A study by the National Center for Biochemical Information reports that sleep apnea is present in as many as 45% of all obese people.

Not all of these people will suffer from the same severity of sleep apnea: but its increasing prevalence is very alarming, especially if the dangers of sleep deprivation are taken in mind.

Thankfully, multiple studies have shown that simply losing weight can help lessen the severity or even eliminate the preponderance of sleep apnea symptoms in many people. Make sure to talk to your doctor about an exercise and dieting plan that can help you safely and healthily lose weight.

If you have any questions or concerns involving sleep apnea or wish to be assessed of your risk of contracting this illness, please click on the link or call the number below.  We can help get you through this difficult problem happy and healthy.