Sleep apnea is more than bouts of interrupted breathing and loud snoring. It is more than disturbed sleep and daytime sleepiness. Sleep apnea disrupts your life, socially, physiologically and psychologically. If you know or suspect you’ve sleep apnea, you’re not alone.  According to the American Sleep Apnea Association, 22 million Americans suffer from sleep apnea. That’s a moderate figure as 80 percent of the moderate and severe cases of sleep apnea go undiagnosed. Sleep apnea may result in diabetes, obesity, depression, and heart diseases. In this article, we’ll discuss how sleep apnea impacts heart health and circulation. 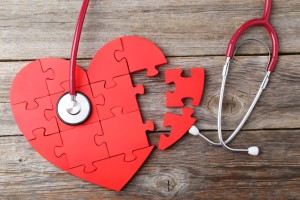 Sleep apnea affects more than just breathing, it can also have an impact on heart health.

There three different types of sleep apnea. Obstructive sleep apnea (OSA) happens when the tongue collapses against the soft palate and the soft palate collapses on the back of the throat (like a domino effect), blocking crucial airflow to the brain. Lapses in breathing, known as apneas can happen hundreds of times a night. Each obstructive apnea is the absence of airflow for at least 10 seconds. In central sleep apnea, the airway is not blocked; rather, the brain fails to signal the muscles to breathe. Complex sleep apnea refers to the combination of OSA and central sleep apnea.

Sleep apnea is notoriously linked to numerous health issues and one that is deeply disturbing is the effect sleep apnea has on heart disease. Physicians and researchers note that people who suffer from heart disease such as hypertension, heart failure, stroke, heart attack and irregular heartbeat usually suffer from sleep apnea as well. Whether sleep apnea causes heart problems or vice versa is not clear; but one thing remains clear: if you’ve sleep apnea, your chances of developing heart disease increase significantly.

Proper and effective blood circulation is crucial to heart health. When OSA happens, it disrupts air flow and oxygen level goes down as a result. The brain senses the low oxygen level and sends signals to the nervous system to tighten blood vessels in order to increase oxygen. When blood vessels are constricted or tightened, blood pressure goes up.

The problem doesn’t stop when daylight comes around. The night-time low oxygen triggers multiple mechanisms that carry over during daytime. Essentially, the effects of sleep apnea affect the body, even when the body resumes breathing normally.

Heart disease is the leading cause of death in America. According to the National Sleep Foundation, a new study shows an increased risk of heart failure and coronary heart disease in middle-aged and older man suffering from obstructive sleep apnea. Due to the strong correlation between sleep apnea and heart disease, treating sleep apnea is imperative for improving or preventing heart health.

Stroke and sleep apnea signal major health risks. The risk of death increases significantly if you’ve a previous stroke episode. Research reveals that men with moderate to severe sleep apnea are three times more likely to have a stroke than men with mild or no sleep apnea.

Heart failure affects almost 6 million people and is the leading cause of hospitalization for people over 65. Heart failure doesn’t necessarily mean the heart stops working, rather, the heart can’t pump enough blood to meet the needs the body’s needs. About one-third of heart failure patients also suffer from sleep apnea, which can further complicate the situation.

Finally, sleep apnea can have a significant impact the health of your kidneys.

As noted, sleep apnea has a negative impact on heart health. Sleep apnea can happen to anybody, though it is more common in men over 40, especially those who are overweight or obese. If you know you snore and feel sleepy during the day, you may want to see if you’ve sleep apnea. Identifying the problem will allow you to get the help needed to treat sleep apnea, so as to prevent the risks of cardiovascular disease and heart failure.