Doctors have been recommending CPAP (Continuous Positive Airway Pressure) machines for over 25 years now.  They’ve become almost ubiquitous in the battle against sleeping disorders, especially for those with sleep apnea or obstructive sleep apnea (OSA).

But as many people now know, there is a new procedure called RFA (Radio Frequency Ablation) which has many people asking “what is the difference?”

As mentioned above, CPAP machines came into vogue in the 1980’s as a nightly solution for getting more air into the lungs while sleeping.  A mask, a hose, and a machine that forced air into a patient’s nose and mouth was a convenient way for many to “kick-the-surgical-can” down the road.  But the convenience of these devices hasn’t been without its problems, including the fact that as many as half of the people who should be using their CPAP machine on a nightly basis actually aren’t.  This low compliance rate is a constant concern for physicians and patients alike.

Enter RFA, a new and non surgical treatment option for sleep apnea.  It is intended for individuals who cannot tolerate the CPAP mask, or for whom CPAP is ineffective. 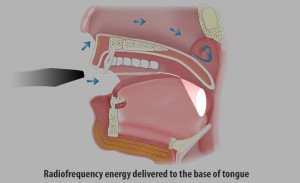 RFA can be a safe, effective, non-surgical solution to your sleep apnea problem.

Advantages of the RFA procedure over surgery include:

Note that RFA doesn’t cure everyone.  But since sleep apnea can lead to significant health-related issues if left untreated, and having a CPAP machine that you ultimately end up not using is not a solution, RFA is worth a closer look.

Prospective patients should start by seeing their doctor and getting a sleep study.  If you need help in getting that process started, contact us for a no obligation consultation.  We are the sleep specialists at Chevy Chase ENT located in the Virginia, Maryland, and Washington D.C. metro area dealing with sleep apnea and sleep-related problems.  We can help diagnose your condition, recommend whether a sleep study would be beneficial, and offer you a variety of treatment options including CPAP, Radio Frequency Ablation (RFA) and more.