The hallmark of apnea is repeated episodes of breathing cessation due to airway obstruction during sleep.

The Respiratory Disturbance Index (RDI), is a commonly utilized index to quantify the severity of the apnea. The index is a numeric specification of the number of abnormal breathing events per hour.

Sleep apnea sufferers usually are not aware of these airway obstructions. 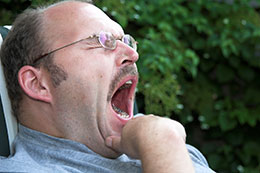 Much has been learned since that time, including a variety of sleep treatment options, including RFA.