Sleep Apnea and Its Connection to Other Medical Issues

Sleep apnea is caused by an obstruction of the upper airway while the person is sleeping. This is generally caused by the soft tissue at the back of the throat collapsing and blocking the airway. The problem is intensified when the person sleeps on his or her back.

When the airway is blocked, the person temporarily stops breathing. Although the person will soon resume breathing, sleep apnea often disrupts the person’s sleep patterns and can lead to tired feelings throughout the day, even if the person appears to have gotten an appropriate amount of sleep. Although snoring is often associated with sleep apnea, it is not the only condition which has a connection to this sleep problem. 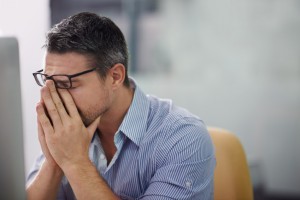 In one study, men with both OSA and daytime sleepiness were four to five times more likely to have depression than those with neither problem.

According to Tracy Nasca, executive director of the American Sleep Apnea Association, up to a quarter of children labeled as having ADHD  actually suffer from sleep apnea instead. Because of the mislabeling, the children are then prescribed medications they do not actually need.

Recognizing sleep apnea in children can be a bit harder than diagnosing it in adults. Whereas adults who do not get enough sleep act groggy and might become slower, children not getting enough sleep often continue to be active and may even become hyperactive, hence the ADHD diagnosis. If you have a child who seems to have both problems with sleeping and hyperactivity and someone has suggested the child might have ADHD, it is worth consulting an appropriate medical professional, preferably a pediatrician or one who deals with pediatric care, to see if the child has sleep apnea instead.

For children, removal of the tonsils and adenoids can sometimes resolve the sleep apnea problem. A Continuous Positive Airway Pressure (commonly called CPAP) or lifestyle changes such as weight loss (for overweight or obese children) might also be considered.

A recent study looked at 1,875 men between 35 and 83, none of whom had been previously diagnosed with Obstructive Sleep Apnea (OSA). The men were evaluated for depression twice in a five-year period. The study also included a sleep study, and the men were asked questions about their daytime sleepiness. Men with both previously undiagnosed OSA and daytime sleepiness (two often connected problems) were four to five times more likely to have depression than those who did not suffer from either problem.

Although bedwetting is often seen as a childhood condition which the child will eventually outgrow, those suffering from a variety of conditions may also occasionally wet the bed. Unfortunately, sleep apnea is one condition where you may experience bedwetting, even as an adult. According to an article about bedwetting and sleep apnea in children, researchers feel the two are linked because of a chemical imbalance in the brain. The brain, not receiving an adequate amount of oxygen, then has problems properly getting and processing signals from the bladder.

Two other disorders which have connections to sleep apnea are post-traumatic stress disorder, specifically PTSD of U.S. veterans, and night sweats. The PTSD and sleep apnea connection discovery came about as researchers looked at 195 Iraq and Afghanistan veterans who sought help for PTSD. Roughly 69 percent were at high risk for OSA. The greater the severity of the person’s PTSD, the higher the risk for sleep apnea. Night sweats come about because the person’s struggle to breathe requires an increase of energy, leading to sweating.

Of course, there are a variety of other conditions which have at least some connection to sleep apnea. To learn more about sleep apnea and to learn about treatment options for it, give us a call at the number below.If you or someone you know is in need of a better night’s sleep, contact us for a no obligation consultation. We are the sleep specialists at Chevy Chase ENT located in the Virginia, Maryland, and Washington D.C. metro area dealing with sleep apnea and sleep-related problems.  We can help diagnose your condition, recommend whether a sleep study would be beneficial, and offer you a variety of treatment options including CPAP, Radio Frequency Ablation (RFA) and more.